Jump to Latest Follow
I had two old project guns in my closet that I needed to repair and refinish last commencement season in order to reward two of my grandchildren on the cheap. Unlike many others here I don't need to make "pawn shop finds". The FFL that I've been using for many years is a local pawn shop. The owner knows that I buy old, rusty, inoperable walnut and steel-era guns to repair, modify, or restore. He calls me as a last resort whenever he takes in a hopeless case that he needs to unload. On this one, he warned me that it looked like Bubba had put a quart of oil in the receiver that seeped into the stock before he stored it wet in a cloth case. Then he sanded it in a futile attempt to get "down to the original finish". Needless to say, this one was beyond the stage where a Big 45 pad would have been useful:


I was working on an old Marlin 39A for the other grandson at the same time and killed two birds with one stone by using the same stain and batch of Acraglas gel on this gun.

You can read about the Marlin project here: 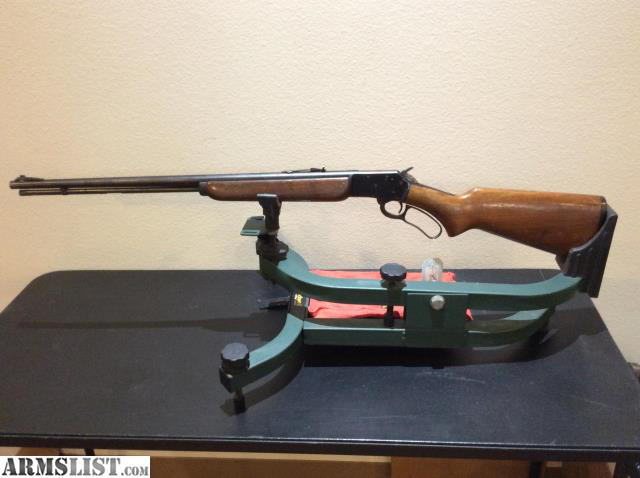 Marlin 39A Repair and Refinish

I had two old project guns in my closet that I needed to work on last commencement season in order to reward two of my grandchildren on the cheap. I had purchased an early model Marlin 39A through Armslist that was in need of repairs to the action. The metal finish was worn and covered in light...

Gill Gun said:
Fantastic Job Sir! Most people would not take the time or love to redo a classic rifle like this.
Click to expand...

Thanks! If you need a hobby, it's cheaper than fixing old cars.😏
I grew up next door to my grandfather's gunsmith shop watching him work on these. My son still has the one he restored for me.

My gradfather was born in 1880. Like lots of family farmers in the Connecticut Valley, he had to learn a useful trade to put some folding money in his pocket. So, he worked at Winchester for about 20 years. He was a journeyman in the gunshop there by the time he quit and moved to a farm in Arkansas shortly after WWI. He was in his 70s and retired by the time I was born. He ran a small shop to supplement his pension. He advised me way back then that it was a dying art because most people just throw them away or put them in the closet and forget them when they get a new one.
T

Many of the 1890s and later Marlins and Winchesters were stained with reddish hues. I didn't blacken the pores on these or mix the standard stains that are used to match those. I just employed an off the shelf Rustoleum 1 hour product that was similar, because I knew it could be used to dye my Acraglas without any adverse effects on curing.
T

retired3100 said:
Beautiful job! Your work inspires me to get working on an old 1906 that I have in the garage.
Click to expand...

That's what I hope these posts will accomplish.
T

oldbird13 said:
I hope you have show your lucky grandkids some photos of “before” so they can hopefully appreciate how fine a job you did. Congrats.
Click to expand...

I have five grandchildren. They've seen many of my restorations and refinishing jobs before. I never took pictures of any of them until I started lurking around here. I still get too eager to get to work on them and get them back together and delivered. So in many cases I realize that I forgot to get certain before, in-progress, or after pictures until it's too late.
T

oldbird13 said:
Traptinkansas, I am in need of adoption. Please send your info so my adoption counselor can reach out to you. Oldbird13
Click to expand...

LOL! Just keep in mind that these were consolation prizes. They were handed out along with the explanation that Grandpa was going to be selfishly hanging on to the Winchester 9422s just a little bit longer:

Daniel Defense firearms, parts and accessories
NEW!
10+ members
Join now to ask and comment!
Continue with Facebook
Continue with Google
or sign up with email
Top