Jump to Latest Follow
Some people like to build ships in bottles as a hobby. I've always liked to repair and refinish old worn-out, cast aside, and obsolete firearms. Lately, I've been staying busy helping an old friend restore his flood-damaged gun collection. I had shown him the shop equipment I use to anodize or nickel plate guns while working on his old JC Higgins Model 30. One day he mentioned an old inoperative nickel-plated, single-shot, 12 gauge shotgun that had originally belonged to his grandfather. It had escaped the flood, but it was in extremely poor condition anyway. At a minimum it needed missing parts replaced and some stock repairs. I remembered seeing it five decades ago when we went hunting together as teenagers. It was pretty beat-up looking, even back then. I told him he was welcome to use my shop, nickel plating supplies, and equipment anytime he wanted - and that I'd be happy to help him out or simply do the work myself if needed. He didn't want it re-plated, but took me up on the offer to restore it for him.

You can scroll-down through the entire Diamond Arms - Hardware Store Branded Crescent - (Stevens) - Model 100 album at Imgur. But here are some photos that I started taking after the replacement takedown screw had arrived. (Caution bronze wool and Big45 pad product evangelists may want to leave the room now):


I managed to mask-off and preserve all of the manufacturers markings. He explained that his father had always wanted to strip off the flakey nickel plating and simply have it blued and refinished. But his father ended up putting it in the back of the closet instead. He simply forgot about it, when it developed firing pin problems. One of his brothers had taken it apart years later, but gave up when he couldn't find the right parts to fix it. Somewhere along the way, the unusual takedown screw had been misplaced as well. He was aware of the fact that you could purchase new and used shotguns like it for less money than it would take to buy an hour or two of bench time or machine time from one of our local area gunsmiths. But this one had sentimental value for him and his brothers. So, I told him if he wasn't in any hurry I could find or fabricate the parts he needed and that I would de-nickel, repair, and refinish it in my spare time. Everyone was pleased with the way it turned out:


Reactions: RomeoEcho, FlysAlot, Jive Turkey and 5 others
Save Share
Reply Quote
1 - 20 of 25 Posts

LtCrunch said:
You do beautiful work!

Thanks. It's actually just a very pleasant pastime for me. Anything remotely like work is completely unintentional.

· Registered
Joined Feb 9, 2015
·
176 Posts
Nice job. Love to see older firearms brought back to life. I've done a few myself so I can appreciate your work.
T

Okay, I'll try to avoid telling you "how to build a clock". I'll take some pictures of the tools and contraptions I used on this one and get them posted. FYI, I'm the sort of old-timer who bought Volume 1 of Bob Brownell's Gunsmith Kinks when it first came out. I also have copies of Angier's Firearm Bluing and Browning, Lee Roy Wisner's Handbook of Hard To Find Gun Part Drawings, Newell's Gunstock Finishing and Care, the Gunsmith Machinist series, and pretty a well-equipped shop. But I'll still try to find easier and quicker ways to do things and get what I need from Numrich, Jack First, Midwest Gun Works, or Ebay before I break down and just make one for myself or somebody else.

In general, I'll use whatever tricks and shortcuts I've learned over the years so long as they are up to the particular task at hand. I could just as easily have made a new walnut stock, nickel-plated, or Parkerized this old gun - if that was what my friend had wanted.

In fact, I took the pictures to keep him apprised of the progress and what I intended to do next. He asked me if I could make the metal finish more' matte'? So, I cleaned the oil off and did three more passes of rust bluing and skipped the wire wheel and steel wool carding (burnishing). I just rubbed everything down with an old cotton towel instead. I usually do the same sort of thing with wood finishes when I'm working on gifts for my kids and grandkids. I take pictures, and if they want a gloss finish, I'll leave it alone. If they prefer a satin one, I'll use Rottenstone, Bar Keepers Friend, Scotchbrite pads, Wet or Dry (whatever is within the shortest walking distance) dull down the finish, and then buff with some steel wool.
L

· Registered
Joined Oct 7, 2018
·
200 Posts
so impressive, i've got to learn how to do this. i have some old, not so nice and definitely not collectable rifles in the safe....you've inspired me. thanks

After I was finished with it!!!

I would love to hear how you do your rust bluing as that old 12 gauge turned out just beautiful and it looks way better than the cold bluing, I did on the Favorite above. I was gifted an old 12-gauge single shot that is in very similar condition to the one you worked your magic on and would like to have it look as good as the one you restored for your friend!!! Any help or suggestions would be greatly appreciated!!!
God Bless, Frank.
T

· Moderator
Joined Apr 9, 2004
·
8,430 Posts
Your work in restoring this old shotgun prompted me to dig out an old shotgun that I was given about a year ago. What I found makes me think it is not worth the effort and could possibly even be dangerous. Don't want or need that biting me in the back. But thanks for a really great thread!!!
God Bless, Frank.
T

tfrank said:
Looks like you turned a sow's ear into a silk purse!!! Excellent. We seem to enjoy a similar hobby!!!
An 1894 Favorite as received

After I was finished with it!!!

I would love to hear how you do your rust bluing as that old 12 gauge turned out just beautiful and it looks way better than the cold bluing, I did on the Favorite above. I was gifted an old 12-gauge single shot that is in very similar condition to the one you worked your magic on and would like to have it look as good as the one you restored for your friend!!! Any help or suggestions would be greatly appreciated!!!
God Bless, Frank.
Click to expand...

Hi Frank, I have always enjoyed the pictures of your projects and your progress reports. I'm way behind on getting pictures posted on all of my spring and summer projects. I've discussed some of my techniques here in the past, e.g. 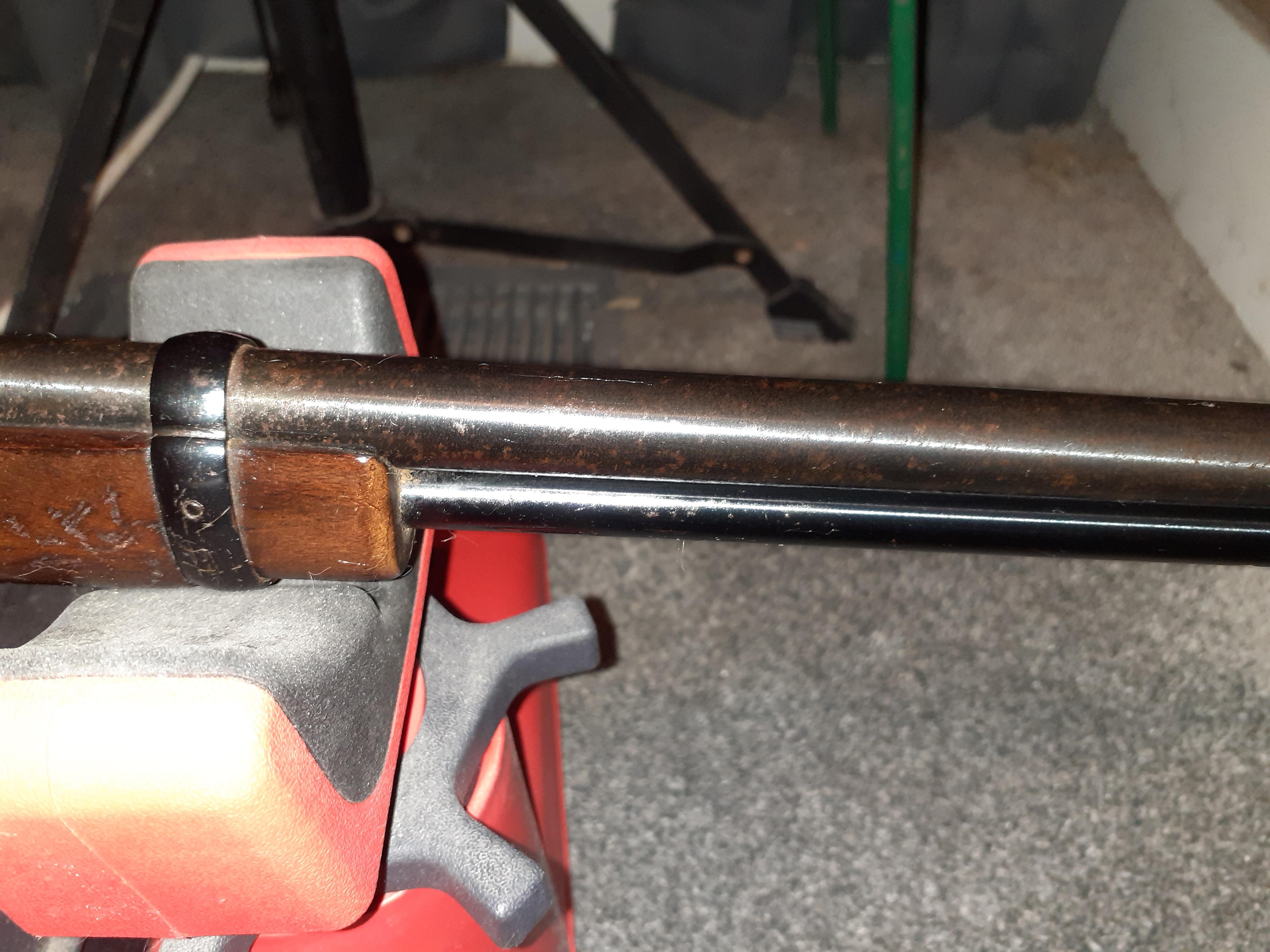 I like to buy old collectable model rifles that are in need of restoration and fix them up for my own use or as gifts for my children and grandchildren. I spotted a Winchester 9422M at an online dealer's website several months ago that had areas with heavy rust and pitting. The metal finish was... 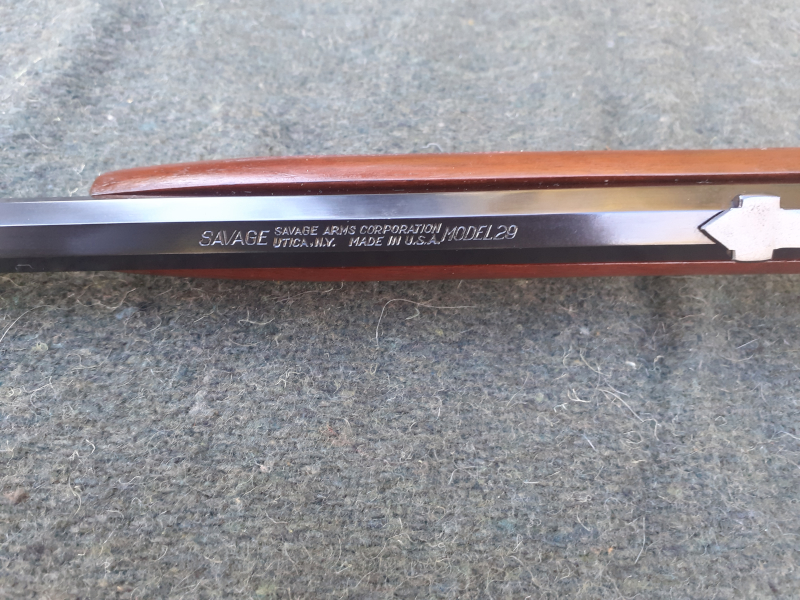 I just finished the restoration project on an incomplete old Savage Model 29 parts gun that I purchased recently. I was lucky enough to find all of the used odds and ends that it needed after scouring Gunbroker, Ebay, and Numrich for a couple of weeks. I quickly got it refinished, back together...

One of my grandsons went through my spare parts and supplies this summer and took pictures of some of my tools and the contraptions that I use to show his brother in Texas. I've posted some of them here with brief descriptions or explanations:

I used to employ hot caustic bluing when I was doing multiple guns at once. But since I retired, I've switched to Mark Lee Express Blue #1 and I never looked back.
There are detailed instructions available here: https://markleesupplies.com/instructions

Express bluing is the process used by the Doug Turnbull technician in this video:

Note: I don't employ a torch. I heat the barrel or action in boiling water first, let it flash dry, and apply the solution with a damp cotton ball. The latent heat in large parts is more than adequate. I use a heat gun and tongs or tweezers to heat small screws, pins, and other parts (between 150 and 200 degrees).

You can compare the Turnbull procedure to the slow-rust bluing process and equipment used by Mark Novak and the owner of rustblue.com here:

Here are some other videos that demonstrate different approaches to slow and express rust bluing:

You don't need to invest in a lot of expensive equipment or build a humidity cabinet to get started. The process is comparatively quick and easy compared to traditional slow-rust bluing techniques. I started out with a PVC pipe capped on one end to hold boiling water and suspended barreled actions from baling wire. I used a cheap Mainstays pot from Walmart for smaller parts. I still use both, but I've added a few inexpensive modifications to the standpipe for ease of operation. To start out you just need the solution, some cotton balls or something to apply it, a heat gun, a carding wheel (Brownells) or some oil-free steel wool (e.g. Briwax). I use old cotton handtowels to handle the parts when they are scalding hot and disposable latex gloves. As I noted above (and in Mark Lee's instructions) you can also use towels or rags to rub down the finish and skip the final carding.

I got tired of heating and transporting water. So I added a 120-volt electric water heater element and an extension for long guns to my original PVC standpipe. I recently put a cheap temperature controller on it so it doesn't require as much attention.

tfrank said:
Thanks for the awesome post!!! Lots of great links and info for me to work through!!!! And maybe some "equipment" to build!!!
God Bless, Frank.
Click to expand...

I used scraps and put mine together on the fly. If you do decide to use a standpipe, you might want to use a 4" or larger one. I have used my 3" one on dozens of guns. The barreled actions with early Stevens-style angled tangs are just barely a no-go. Fortunately, the barrels on Visible Loaders are easily removed and you can throw the receivers in the pot along with the smaller parts.

I should add that my pipe only needs about 1 1/2 gallons of water when full. The water here is very hard (300+ PPM). So I use a Zero Water pitcher to make all that I need in very short order and cut-down on trips to the store.

· Registered
Joined 1 mo ago
·
2 Posts
Hi there, such an amazing job!! I am restoring the same gun, someone has a homemade firing pin in it so I'm looking for a replacement. Would you have photos of the pin? Would you know where I can get one?
thank you
T

· Moderator
Joined Apr 9, 2004
·
8,430 Posts
What gun??? I could help you with the Favorite, but the shotgun I have no experience with. And if you are referencing a Favorite, my recommendation would be to contact "Jack First" or "Weisner's". Just google those names and the websites will pop up. And if one isn't available anywhere, I am only a PM away!!!
God Bless, Frank.
1 - 20 of 25 Posts
Rimfire Central Firearm Forum
A forum community dedicated to Rimfire Central Firearm owners and enthusiasts. Come join the discussion about optics, ammo, gunsmithing, styles, reviews, hunting, accessories, classifieds, and more!
Full Forum Listing
Explore Our Forums
CZ / Brno Open Rimfire .22 Ammunition (S-L-LR) Scopes, Sights, Rings, Mounts & Other Optics Hunting

Daniel Defense firearms, parts and accessories
NEW!
10+ members
Join now to ask and comment!
Continue with Facebook
Continue with Google
or sign up with email
Top